You know how people say that life is easier when the stars align?

Multidisciplinary lessons are lessons that are from different disciplines, which are better known as subjects such as reading, writing, math, spelling and so on.

The neat thing about having a curriculum that combines many disciplines, is that you can customize the curriculum this curriculum not only based on your child’s needs but on your memories and experiences as a family.

For example, when doing an art and math lesson recently, I realized that I could use this lesson as an opportunity to teach

Patterns Are The Building Blocks Of Learning

Sometimes, it’s the simplest things in math (and in life) that make the most impact.

That is exactly the case with patterns.

“If math is a computer language, patterns are the code.” -Haydee Montemayor

So, that means that regardless of how young or old you are, recognizing patterns when dealing with numbers is important. And for children, who are barely learning to understand how the number world works and how numbers are an important part of the world, understanding patterns turboboosts their learning.

A strong understanding of patterns helps in lifelong math skills such as:

And of course, patterns are found in many other things that are not number related.

“Patterns not only helps us understand math, but life itself.” – Haydee Montemayor

Because being tuned out of patterns provides a very limited view of our lives and of our world. Like you’re just going through the motions instead of being inherently curious about the world. (I don’t think there has ever been a better time in history to see how true this statement is).

Exploring The Nuances of A Fun Mother Goose Time Activity

Based on what I’ve shared so far, an activity as simple as creating a snake out of pipe cleaners, straws and beads, all of a sudden has a greater significance than merely doing an art and science activity (both of which are wonderful subjects, by the way).

Seeing a pattern on a snake’s body leads to an interesting conversation about patterns…. as well as a creative and conscious choice to break the pattern.

How We Started The Lesson On Snakes

We started this snake art/science lesson by talking about snakes in general.

We talked about what how the kids felt about snakes…and I was happy to see that none of them have a phobia of snakes (yet).

We then did a tongue-twister. IT was cute to see kids try their first one.

We then talked about what snakes ate and how big or small they thought the animals they ate were.

How The Lesson Became More Intriguing

Then the fun started to build up as the kids used the Baby Einstein Look At Me Mirror Discovery Cards  to open their mouths as wide as possible as they discovered that snakes can eat anything that fits in their mouth including ducks. This was as eye-opening as it was jaw-dropping.

How The Lesson Became More Actionable

The children then picked up the duck counters with the tongs. If you ever are in the market for tongs, other than using your kitchen tongs, you can look for some tweezers at The Dollar Tree or pick up some on Amazon.

After that, the kids made their pipe cleaner snake based on the Inspiration Photo. The straws that came with the curriculum were  jumbo straws and went right through the pipe cleaners, meaning they were useless for the task. So, I just tested the pipe cleaners with my regular straws, and they worked out fine.

So, while the Mother Goose Time curriculum is great, it isn’t always 100% perfect, but that’s okay, because it still leaves you much further along than you and your homeschooled child would without it.

How The Lesson Morphed Into Something Even More Relatable

Given the fact that snakes are common in my area (although I’ve been spared the shock of seeing one in the wild), I decided to turn this lesson about snakes into a safety lesson as well.

I warned my kids that they shouldn’t touch snakes and they should inform an adult if they see one. I talked a bit about poison. But I’ve found that it’s always a good idea, at least for my children’s ages, to talk about dangers in a “light” way meaning that I convey the seriousness and danger of the topic at hand, but I don’t like to giving way too many details about the topic because I feel that it’s almost like calling too much attention to the very thing that I’m asking my kids to avoid. Does that make sense? If you’re a parent, or if you’ve been a kid yourself (  😉 wink, wink ), you know that for some kids (hopefully, not yours), the more their parents prohibit something, talk about or judge something, the more captivating and alluring that thing becomes.

So when it comes to snakes, I kept it simple without fostering fear.

We also talked about the snakes using the prompts that came with the lesson that talked about:

This happened to be a lesson that was an assessment, So I assessed motor control while threading. One thing to keep in mind, regarding the step that calls for students to cut the straws, one important thing to note is that at least a couple of the scissors that the kids used, and are really beginner scissors, weren’t able to cut through the straw. So you have to adjust how you’re going to do that assessment.

Here are a couple of snakes that we created: 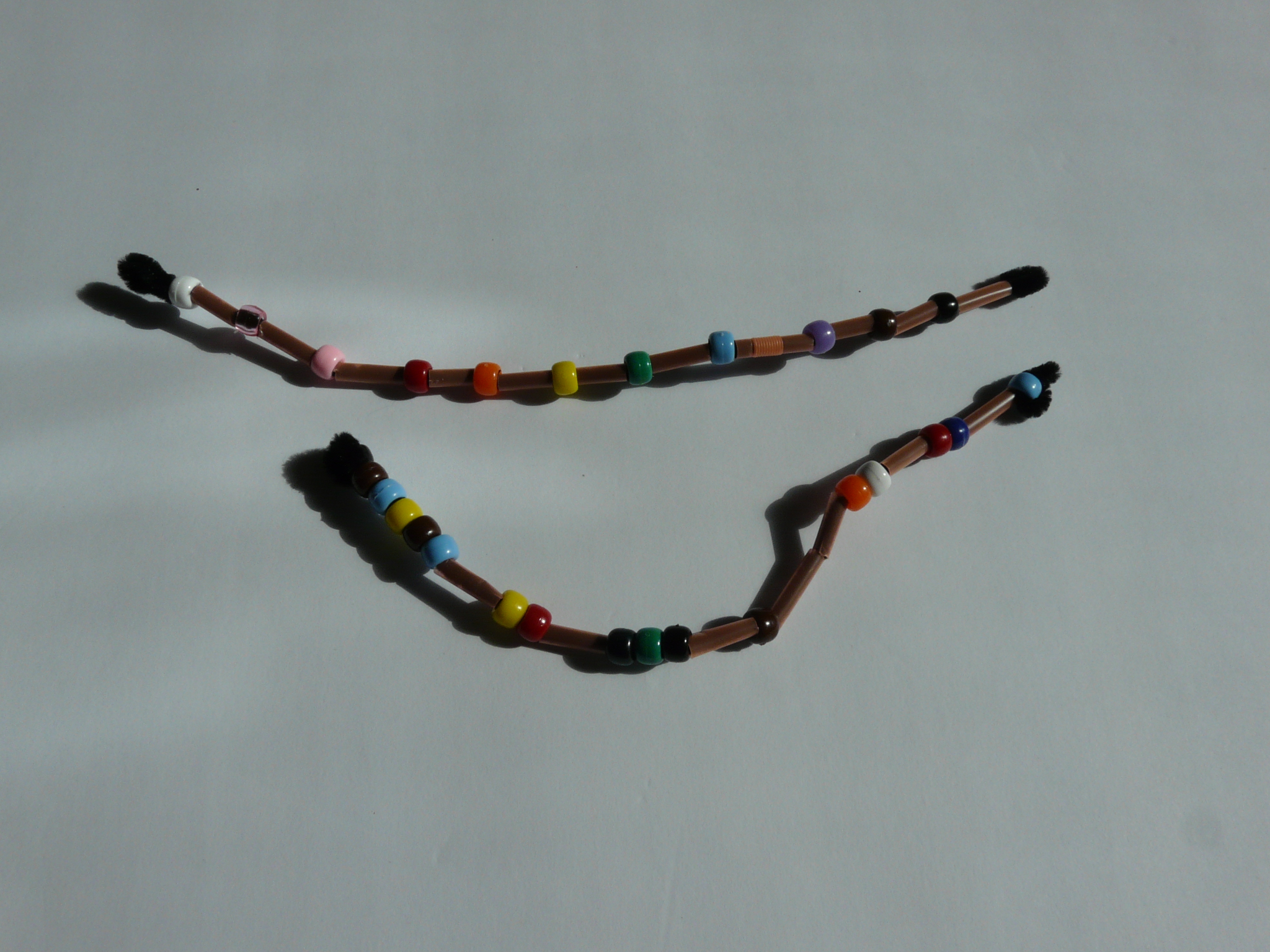 In order to accommodate the needs and ages of my kids, we also did a safer version of the snake: 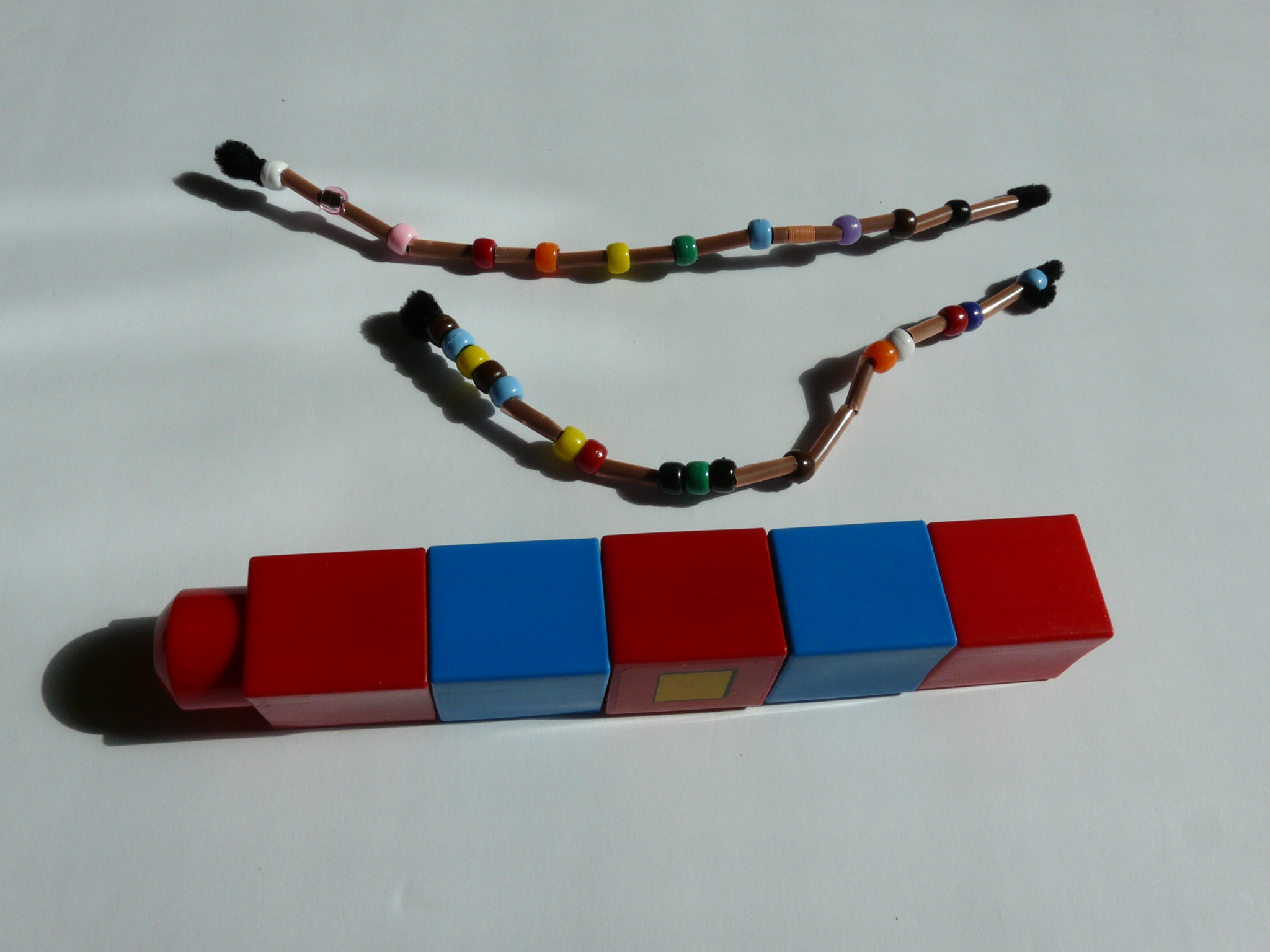 Even though this snake was initially done to accommodate for the one of the kids, it was useful to use these Larger First Builders Mega Bloks to share more examples of the ABCD, ABAB, ABCA patterns, among others since it was also part of the Investigation Station.

Even in a wonderful Mother Goose Time lesson, there are things that don’t go as smoothly as one wishes. So you, as the instructor have to show greater patience and make it a point to provide further practice during that lesson and revisit that skill later on. 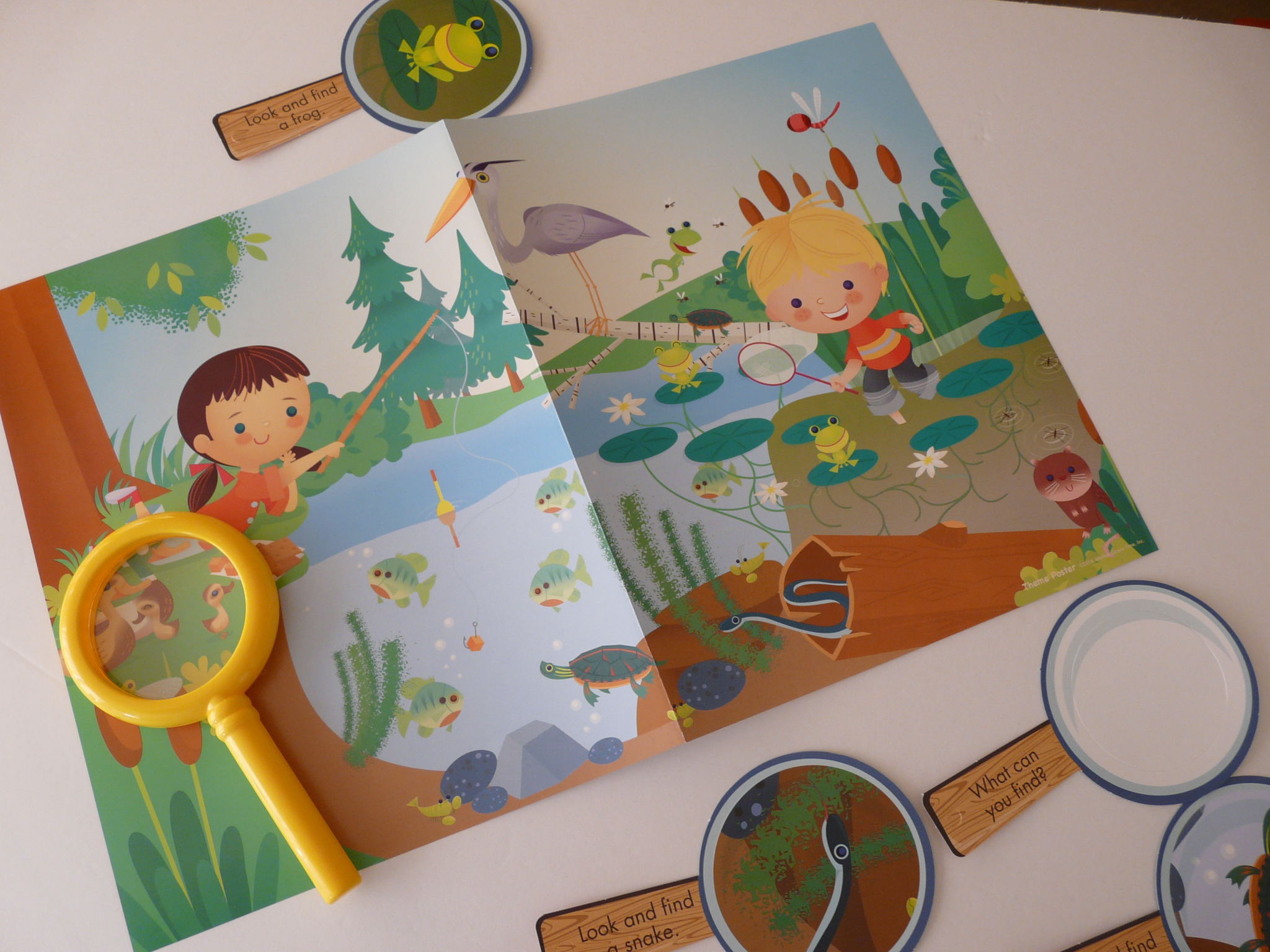 For example, the kids that I worked with had never played I Spy. So, while it was easy for them to find the animals shown on the Looking Glass cutouts that matched the poster (which was kind of like a matching game) and participate in the prompts that dealt with that particular animal that they had found, when it came to actually describing something on the poster, some children struggled a little bit because they were then faced with the need to describe it without pointing to it, touching it, staring at it, or outright giving out the answer by naming the object. This I Spy game took several tries and patience.

And while it may be seem like a very simple concept to an adult to be somewhat “sneaky” and secretive about the item that one is looking at from the corner of one’s eye or as discretely as possible, children are usually so innocent and honest that they may have not figured how to do this yet.

So, instead of feeling let down by what they can’t do, model for them the behavior that you hope they adopt in the future.

On the happy side, they enjoyed guessing the object quite a lot.

So something that can help is providing the kids the opportunity to play I Spy in a much more casual setting such as in the family room, in their brother’s bedroom, in theirs, at the park, or whatever casual setting you’re in. Practice makes perfect.

Despite some setbacks, which are a regular part of learning and progress with anything in life, the the entire-day’s lesson on patterns and sorting lesson was great.

Applying Lessons From Mother Goose Time Out In The Real World

I don’t know about your kids… but even though I have been brushing my son’s teeth for years (because, as you may know, you should help them brush their teeth until they’re about 8 years old or so and they hopefully learn cursive— although I doubt cursive is taught anymore)…. I had to keep reminding him to open his mouth.

But, thanks to the super-duper important lesson on snakes we had ? …. guess what?  He has never opened his mouth bigger and allowed me to brush his teeth as efficiently because he remembers that snakes are able to eat anything that fits into their mouths when they open them large and wide.

He was so impressed by this fact, that he shared it over a birthday breakfast. Out of the blue. Like he had an important thing to share with another person.

And it IS important, because at his dental cleaning this month, he opened his mouth wide all throughout his cleaning and it was also done super efficiently. It’s been the best dentist visit so far. And that’s saying a lot because, thankfully, all of his dental visits have been good. This is just taking it to the next level. And, that’s pretty much the way I feel about the lessons.

Mother Goose Time graciously sent me this curriculum for free in exchange for me sharing my honest experiences with you, and I can honestly, highly recommend this curriculum. It’s a game changer, because it has lessons that will enrich your child’s understanding of the world through its various disciplines AND it will make your kid smarter, more curious, more engaged with the world because it’ll foster an endless pursuit of pattern identification, not to tear their understanding of the world apart, but rather to see how everything fits together as one.

You can find out more about this curriculum by visiting www.mothergoosetime.com .

What is an activity that you’ve done with your child to get a better feel for their understanding of patterns?

What subjects do you think lend themselves the most to pattern recognition? Why?